Activate All Your Intelligences

There was a long held belief in the field of education, across humanity, and in society that we possessed a single intelligence. It was also believed that this intelligence could be measure and the Intelligence Quotient (IQ) was created. Researchers from all over the world began to design and conduct research to identify ways to measure human capability and performance, which ushered in a host of IQ measurement instruments and tools designed to measure this single intelligence. It was not until Dr. Howard Gardner, a psychologist and research professor at Harvard University, discovered through brain research that we (human beings) have more than one intelligence. His research proved that we have multiple intelligences not just one single intelligence that could be studied and measured. Before, Gardner’s research many researches believed that this single intelligence governed every aspect of the human brain from learning, thinking, reasoning, speaking, and any other human ability that we are able to tap into and express. Gardner identified the following intellectual faculties: 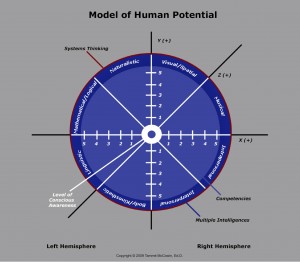 The Model of Human Potential is an integrated performance assessment (IPA) measurement. Unlike historical measurement techniques that attempt to measure human capability and performance as a single general intelligence in an isolated fashion, this model measures human potential from a holistic and integrated measurement methodology, which includes the following five key components.

Provision is an online learning series that broadcasts weekly on Oracle TV. Dr. Shinshuri hosts weekly online television broadcasts to assist followers of Oracle Radio and Oracle TV with reactivating their divine gift and unlocking all of their intelligences through interactive discussions, tutorials, and demonstrations. Different topics from five core knowledge domains are covered including: business development, digital media, instructional design, personal leadership, and web design technology. The Provision Learning Series airs every week on Oracle TV. The live broadcasts are free. The show archives are accessible to Shinshuri.com members. If you are a current or free member you can upgrade your account for only $10 per month and gain unlimited access to a library archive. The libraries include:

Followers, guests, and visitors of Oracle Radio and Oracle TV can join Shinshuri.com for free as a Personal Leadership Member and gain immediate access to the complete Personal Leadership Library. Join www.shinshuri.com and subscribe to one of the digital libraries or upgrade your account if you are a current member. A percentage of the revenue generated goes to Oracles of Truth Academy in support of tuition-free college education.

Be proactive about your personal leadership and professional development while supporting tuition-free college education!